The Blue Sheep Farm arrived at Schloss Leopoldskron on the occasion of Salzburg Global Seminar's 2017 June Board Gala Weekend. It helps celebrate the 70th anniversary oft he international non-profit organization which challenges current and future leaders to solve issues of global concern. Since 1947, Salzburg Global has been working toward shaping a better world by forging breakthrough collaborations to bridge divides. Salzburg Global's program theme for its anniversary year is courage. The courage to tell truth to power, to tackle vested interests, to express artistic voice and freedom, to build coalitions for change and to see through tough choices. In divided societies, people need the courage to stay true to their beliefs. Leaders need the courage to curb their exercise of power. Together, we need the courage rekindle our collective imagination to rebuild society from the top down and the bottom up. In line with Salzburg Globals's values, the Flock of Peace makes an equally courageous effort in promoting mutual understanding, tolerance and peaceful coexistence, placing emphasis on the need for peace and equality in the world. 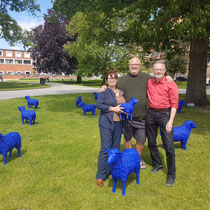 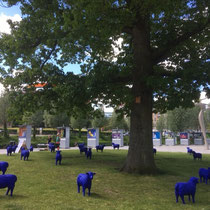 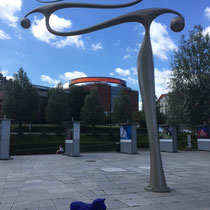 The European Movement Denmark (EUROPABEVAEGELSEN) had emerged after the Second World War and had committed itself to the promotion of European integration. In January 1947 the "United Europe Movement (UEU)" had been established in Great Britain, which was mainly based on the objective of a European federation of states. In May 1948 the Hague Congress proclaimed the goal of founding the National Councils of the European Movement, which were to join an International Council at European level. In 1949, EUROPABEVAEGELSEN (the Danish European movement) was founded in Denmark.

In 2017, Aarhus is the cultural capital of Europe. The Midtjylland region and the 18 other municipalities in the region support the project. The BLUE FLOCK project is hosted by EUROPABEVAEGELSEN. The BLUE FLOCK will graze in Moellenparken, in the heart of Aarhus, in June and in August.

Our Newsletter, informations and news, six times a year: